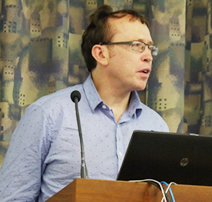 Scleroderma occurs mostly in women aged 30 – 50 years, with perhaps 50 to 300 cases per million, according to Dr Richard Steele. He says there will be about one new case per million people each year. When men contract it, they usually do so at a younger age compared with women.

Dr Steele says the cause is generally unknown. It can be limited, such as CREST as well as diffuse and it can affect internal organs, causing vascular, respiratory and digestive problems amongst many others.
No one, it seems, knows why you have scleroderma but Dr Steele says an infection with a similar structure to the human protein may trigger an immune response that directs itself against the human protein while fighting the intruder. It’s called molecular mimicry.

It’s possible that chronic infection or your environment may stimulate the disease. Researchers, have investigated such environmental agents as are found in silica, gold and coal mining environments. They look long and hard at organic solvents found in paint products, acetone and degreasers.

One theory is that a mother and baby may exchange cells during pregnancy and one of them may treat the other’s cells as foreign and attack them.

The roll of the laboratory

Dr Steele ran through those short acronyms that appear on all blood tests that scleroderma sufferers learn to recognise.

Systemic scleroderma causes the body to produce ‘autoantibodies’ or, antibodies. They are immune system proteins that attack the body’s own tissues. He says nearly all those with scleroderma have a positive ANA. When your body directs auto-antibodies against particular proteins, the doctors infer that you are suffering from systemic sclerosis or its variants.

After ANA, Dr Steele says the next step is an ENA test. ENA stands for Extractable Nuclear Antigen Antibodies. There is a mixture of 3 routine and around 15 non-routine tests. Dr Steele says some of the tests are complicated and need to be done overseas.

ESR is a reliable test that measures how fast in millimetres an hour red blood cells sink down a measuring tube.

Your liver produces CRP in response to inflammation caused by autoimmune and other conditions. Its levels rise and fall quickly, much more so than ANA’s.ESR and CRP levels are higher in those with systemic sclerosis and a raised ESR is to be monitored closely.

Studies suggest two types of systemic sclerosis: inflammatory and fibrotic. Neither has a cure as yet. Regardless of the type, Dr Steele says his profession needs to balance the severity of the condition against possible side effects of medication.

“The prognosis remains guarded when the condition is extensive and involves internal organs,” Dr Steele says. In these advanced cases he says there is a 5-year survival rate of 90% of patients.