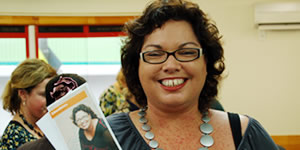 The side effects of scleroderma affect teeth and gums in many ways. 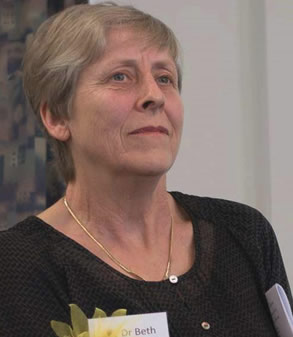 Dr Henderson presented a grim list of how teeth suffer from lack of saliva, reflux and an inability to manipulate a toothbrush to clean them effectively. She concentrated her talk on dental problems and ways to deal with them.

Up front was dry mouth. Dr Henderson says sufferers are susceptible to tooth decay and gum disease. The saliva can turn acidic. Alkaline saliva is preferred as acid attacks tooth enamel. She says fibrosis of the oesophagus can make reflux a problem as it’s highly acidic and erodes tooth enamel.

She says dentists and dental hygienists can’t cure the problem but they can help a patients who see them regularly to manage it.

She says professionals have recently recognised the importance of saliva’s role in protecting the teeth and mouth tissues. She helps patients fight dry mouth with aids such mouth washes. She gave as example, BioXtra and Oral 7 as rinses that she had found to be beneficial. While they’re not commonly available at chemists, they can be bought online. There are gels that help keep the mouth moist.

Gastric reflux, strongly acidic, attacks tooth enamel. It can destroy the top layer of enamel to expose softer dentine, which, she says, erodes much faster than enamel. Teeth eroded to the underlying dentine are difficult to fix because they’re soft and fillings won’t adhere to them.

Management includes chewing gum, a mouth rinse using baking soda (a teaspoon in a glass of water). She recommends sipping the baking soda solution throughout the day, especially after meals. To overcome the taste, Dr Henderson says just drop a small amount of almond or peppermint flavouring into it.

High levels of plaque can result from patients who have difficulty cleaning their teeth or a dry mouth. Plaque encourages decay around the tops of the teeth and can occur quickly. It harbours acid-producing bacteria that exacerbate problems already inflicted by reflux and a dry mouth.

To remove them, Dr Henderson says she uses Curasept, an anti-bacterial mouthwash. She then uses a selection of high-dose fluoride toothpastes and tooth mousse to replenish minerals in the enamel.

Gum disease is associated with scleroderma. It’s acidic saliva that brings on plaque, which, in turn, irritates the gums. The gums can swell and release toxins and affect the bone structure around the teeth. It may not be obvious to the patient, another reason for regular visits to the dentist.

Dr Henderson told the seminar that she prefers electric toothbrushes, particularly if dexterity is a problem. She recommends either Braun or a Philips’ Sonicare. If you prefer a manual toothbrush, she says use the smallest head that you can find. The bristles should be flat, not trimmed in a jagged pattern. She recommended flossing too, calling it, “mandatory”.

To help patients with tightened skin and lips around the mouth, she has exercises design to retain elasticity, such as pursing of lips and exaggerated smiles while leaving the lips to cover the teeth. She recommends that patient carers should accompany the patient at the dentists so they can learn about the tooth-cleaning regime.

Dr Henderson says it’s most important that people with scleroderma visit a dentist and dental hygienist regularly, to can catch problems early, before they become serious. She says many dentists are unfamiliar with scleroderma so let them know about the particular problems you experience.