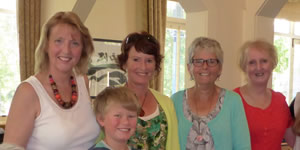 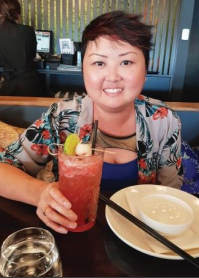 2018 was a year of reminders and learning, as a patient, as a nurse and as a human being. I was reminded of karma, compassion, humility, resilience and patience.

Never in my life did I anticipate having to one day rely on someone else, or on so many other people’s decisions to keep me alive. Let alone having to receive a bilateral lung transplant!

My transplant journey began in 2006 when only a year after getting married, I was diagnosed with scleroderma an autoimmune disease that may result in changes to the skin and internal organs. I’d never even heard of it before. I attended many rheumatology clinics and started on a myriad of drugs. My swollen hands, AKA my “boxing gloves”, started getting in the way of my work as a nurse in the theatre recovery department. Methotrexate worked for me and my hands finally went down in size, but then I noticed I couldn’t take in deep breaths. I was referred to the respiratory service in 2008, started on other drugs and after numerous tests I was diagnosed with lung fibrosis.

I knew this was going to eventually get worse and so my husband and I travelled while we could. In 2010 my scleroderma flared up and further lung fibrosis was picked up by a CTscan, so chemotherapy (cyclophosphamide) was prescribed for six months to suppress my immune system. I was then referred to the transplant team who concluded I was sick enough for chemotherapy, but not sick enough for a transplant. So I carried on working during and after chemotherapy and we went back to travelling after the cycle had finished.

By 2016 my health had deteriorated and I was getting short of breath doing simple tasks. At the end of that year another CT scan showed that my lung fibrosis had progressed and I was sent back to the transplant team for a full assessment in May 2017.

In June 2017, much to my surprise and shock, I was placed on the active transplant list due to pulmonary hypertension. My husband and I left that clinic appointment stunned!My nursing background meant I knew a lot about operations and theatres, but not enough about transplant surgery. I personally had never had an operation before! I had so many questions and I wanted to see the surgeon and anaesthetist first. So the following day the transplant coordinator called me and we agreed that I could come off the active list temporarily to have more time to gather the information I needed.

In August 2017 I went back on the active transplant list not knowing how long I would be waiting for a donor. I also started oxygen therapy for several hours a day and I initially felt better. Unfortunately over time, and I’ll never forget how bad I got, I ended up on oxygen 24 hours a day and I became very dependent on it. I would be anxious about how much was in my tanks and I would constantly check.

Besides my physical decline – relying on a wheelchair and oxygen, my mental health also declined; to the point where I became quite withdrawn and sad about what could be the end of my time at age 36.

I’ve cared for many people throughout my nursing career as a recovery and theatre nurse, seeing them at their most vulnerable, weakest, sickest and most desperate times of their lives. I’d like to think I was able to demonstrate to my patients in the short time that I met them, the compassion, care and dignity they required at their time of need. I hope this was the good karma that blessed me when I finally became a patient. 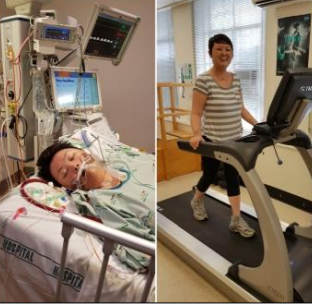 Later in 2018, after over a year on the transplant waiting list, a family selflessly agreed to donation and I received my lungs. I underwent an eight hour bilateral lung transplant surgery and I now have tailor made lungs, cut down to size to fit me as my donor was slightly taller than me – not many people can say that! I bled post operation and had to be returned to theatre. So I now have many other people’s donated blood running through my veins to go along with the new lungs I received.

Post-surgery I was on ECMO for eight days, followed by a tracheostomy for 11 days along with multiple other necessary life-preserving tubings. I cannot praise the care I received from the CVICU nurses enough. They were thorough; I was closely monitored from head to toe.

I hated being a patient though as I couldn’t do anything for myself, I had so many lines in and couldn’t shower – yes I felt gross! The worst thing was I couldn’t talk due to the tracheostomy, but I appreciated the care, dignity and compassion I was demonstrated by my fellow colleagues in health. I communicated by writing and as a lot of CVICU staff can also tell you – a lot of eye rolling. I was in CVICU for three weeks where I relearnt to eat, drink, breathe and walk again. I impatiently thought I was ready for the next task so I would keep asking – what’s next? Patience was eventually imposed on me and I finally understood that I had to go with the slow flow that is recovery from major surgery.

I completely underestimated the surgery and the recovery period. I had a lesson in humility as I was not comfortable letting others see me at my weakest, most vulnerable and sickest and not being in control.

I have learnt so much about the transplant process as a patient, more than I ever have or could have as a nurse. My transplant journey is still very fresh, I look well on the outside, however a lot of hard work and tears have gone into getting this far. I’ve already had two episodes of rejection and infections – transplant patients are so vulnerable because of their immunosuppression. I know I still have many bumps in the road to deal with, but my Tacrolimus tremors and easy breathing remind me I’ve made it to the “other side.” Looking back I realise just how resilient the human body is.

I went to my first post op concert in February 2019; I didn’t have to worry about my oxygen supply or getting stared at in a wheelchair – I was leash-free and breathing freely. I can now walk with my dogs, go on dates with my husband, contribute to the housework and work again. I get to spend time with my siblings and my mother again and most importantly I’m alive! Thank you to the ICU who looked after my donor and their family, to ODNZ for organising the donation, to the transplant team who looked after me before and continue to, and thank you donor family for your selfless gesture in donating your loved one’s organs.

Be kind to each other, you never know how someone will be able to help you in the future! Most importantly talk to your loved ones about organ donation, it made yesterday, today and tomorrow possible for me.